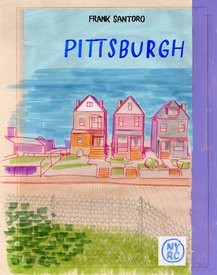 A story that required years of fermentation to arrive at its requisite form, Pittsburgh is a comics meditation on family and identity that unfolds within a complex matrix of time, place and self as it is inscribed within memory.  On the surface, it is a memoir of the artist's parents' courtship, marriage and divorce – and its reverberations through his life.  There are also the supporting tales of two sets of grandparents and the crucial involvement of a neighborhood friend, as well as the mute chorus of the family dog.  This surface is structurally undergirded by substantial formal constructions of great depth that connect this singular tale to a great multiplicity of significances which permeate contemporary society and resonate through our present moment.

The narrative in Pittsburgh is in part recursive, part repetition with variation, part symphonic, divided into movements, each restating the theme and then modulating variations – going over similar moments from different points of view and/or with different approaches both in visual and textual.  And, naturally, part comic book (and/or comic strip) series, in which themes and characters are continually recapitulated to familiarize readers who are (re)joining the story while it is already underway.  As this aspect of repetition with variation is deeply ingrained in the comics form, but not the novel – and not those "graphic novels” which derive from the prose novel form – this aspect of its structure will likely be unfamiliar – feel “different” – to some readers .  In so far as that the narrative structure of Pittsburgh is simultaneously rooted in the serial nature of comic books and the overarching, thematically unified nature of the prose novel, it serves to unite these two worlds.

Its thesis is that identity is constructed out of – and in – memory: Individual memory of one’s own experiences; absorption of others’ memories – particularly those of parents and other family members; cultural memories embodied in texts – works of art, novels, films, television, music, etc.  Together these memories form the individual’s sense of self which is the core of identity.  Its process of drawing from memory substantiating the visual construction of identity from memories through its embodiment in the style and manner of its artistic representation.

One of the most singular aspects of Pittsburgh is that the color scheme throughout is highly subjective:  the color of memory.  Some moments are represented in hyper-vivid, non-representational color schemes, others, deliberately subdued grey tones, also non-representational, but to the opposite effect.  These are mixed with scenes in which the color is to varying degrees representational, varying degrees subjective.  This way of working with color draws the reader into the subjectivity of memory, enabling them to enter into the space of the memories and see how they are “colored” by the emotions attached to them.

And, speaking of color, Pittsburgh is a work that fully exploits the capacity of modern scanning technology to present the work as close as possible to it’s actual physical appearance, which stands in marked contrast to the standard creative approach employed in the creation of comics and graphic novels today, with most, even sole creators – "comics auteurs" – continuing to employ some variation of the breakdown of labor into scripting, penciling, lettering, inking and coloring – especially with coloring. In most color comics, the color is added separately, at the end of the process, and much if not most coloring is done via computer.  The work in the pages of Pittsburgh, on the other hand, is “through composed” in the sense that the delineation of space and the emotional register of color are created simultaneously in a process that forges an inseparable unity between space and color, between the apprehension of place and the emotional register it engenders.  This is, of course, closer to the approach to image making taken by most painters, and, in the incorporation of color into the compositional process – the employment of a simultaneity in color application and and composition – 20th century painters in particular.

The book’s presentation  is designed to provide the reader with an experience that is as close as possible to that of being in the presence of the original art.  In fact, this book employs the same state-of-the-art scanning and printing technology that goes into the exorbitantly priced “Artist’s Editions”, but, crucially, Pittsburgh was conceived and executed with the idea of taking full advantage of this process, right from the start.  The resulting book is a work of visual spectacularity that is unparalleled in this capacity (and that is priced at a mere fraction of the aforementioned artist editions).

And, as in nearly all of Santoro’s work over the last decade (at least), the unit is the spread, as opposed to the page.  Again, this is an artistic choice and one in keeping with the currently available print technologies.  The page became the default unit in traditional comics production as, at the very outset of comics, in the newspaper, the artist was limited to a single (or partial) page, and then, as the comic book grew out of the comic strip, the initial comic book artists were, naturally enough, taking their cues form the comic strip artists who preceded them (and, in fact, were sometimes one and the same).  The original comic book artists also had little to no control over where/how their art would appear in the published, printed version, as nearly all comic books during the first decade or so were anthology titles with multiple stories and artists working for an editor/publisher and so the page order was generally unknown to the artist at the time of creation.  In some respects, given the relatively large degree of autonomy comics artists have today, it's surprising that more artists don’t compose in the spread, as this is what the reader takes in at a glance, each time they turn the page, and so seems a natural way of working.  Santoro’s dual background as a painter and comics maker has enabled him to intuitively grasp the advantage of working in the spread.  It is possible that the lack of this “painterly” perspective is what prevents other comics artists from approaching their work from this point of view.

A key component of Pittsburgh  – that its title makes explicit – is that the family at the center of the narrative, Santoro’s own, represents/embodies/is in some respects a stand-in for Pittsburgh, the city, as a whole.  This, in turn, can be seen as a synecdoche for the urban Rust Belt experience.  Pittsburgh points to ways in which the Vietnam War can now be seen as an inflection point in the "American Century,” when things that were once believed in proved to be false, or at least not what they purported to be, and moral decay – which, in an industrial setting, translates to the rust spread throughout the “rust belt” – began to settle in.  How is this family-as-city a two way street?  How does the implosion of social stability, political truths, and all the foundational assumptions that day-to-day life is set upon impact the individuals and families that make up the nation?  And, conversely, how can the reinvention of the individual and the family then in turn reconfigure social and political models and reinvigorate society?  In some ways, Pittsburgh, with it’s sub-title, “Never Comes Tomorrow,” envisions a society that, for the individually expressed identity, which it is the artist’s function to embody and represent, is, if not at a dead end, on a road to nowhere; more prosaically, that there seems to be no place for the self-aware and self-directed individual in the world of tomorrow that is envisioned and being constructed by the current powers that be (i.e., neoliberal global capitalism).  These themes, while not explicitly stated, are nonetheless implicitly explored in these pages.  In giving novel form to a story that took place in the past and was forged and carried into the present in memory only, and doing so in a way that calls out the human cost of the American Way of Life™ yet simultaneously celebrates those who pay the price, Pittsburgh may, perhaps, serve to illuminate, in some indefinable way, the existence of a path towards a society more accommodating to community and less in thrall to corporate and financial power.  Paradoxically positing a tomorrow when never comes in such a way as to welcome the possibility of the opposite: world without end.

Anyone wanting to learn more about Frank Santoro's life and work and/or dig deeper into Pittsburgh can, here:

Read this excellent piece by Mike Machosky on the Trib Review that incorporates both a review of Pittsburgh and an interview with Frank.

Read Caitlin McGurk's official TCJ interview with Frank on the occasion of the release of Pittsburgh.

Listen to this wide ranging interview with Frank on The Virtual Memories Show (that also takes a few deep dives along the way).

NOW OUT OF PRINT.  We have a small number of copies remaining.  LIMIT:  ONE per customer.

New York Review Comics has stated that they intend to reprint Pittsburgh in softcover.  We're hoping that this edition will be released in 2023, but are not privvy to the details.  As soon as a street date is announed, we will post it here, so please check back.

This item belongs to the categories: Copacetic Select, Featured Item, Gift Catalogue, Graphic Novel, Made in Pittsburgh
You may also enjoy these related titles: