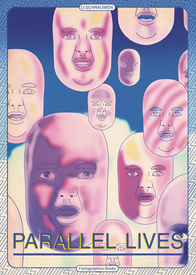 Yes!  The new Olivier Schrauwen collection has arrived, hot off the press.  Featuring the long out of print cult classic, "Greys" – which is a strong contender for the crown of greatest alien abduction story ever produced, in any medium – along with five, new science fiction stories, which have either not ever been published in English, or only in extremely limited edition (and now very expensive) anthologies from Lagon.  The stories range in length from the two page, "Mister Yellow," (although each page is made up of seventy panels!) up through the 66-page epic, "Space Bodies."  The stories are all first-person narratives, with the lead in each story presenting some, gender-fluid variation of O. Schrauwen, whose identity extends though time and space in a fourth-wall-breaking, self-consciously literary device. There are also a couple appearances of one A. Schrauwen (Armand; apparently the artist's father).  "Cartoonify" ingeniously imagines comics/cartooning as an "app", demonstrating that technological enhancements of consciousness are primarily composed of words and pictures, and these have perhaps been most successfully created using pen and paper (and don't forget the that the etymological root of the word (well, prefix) "tech" is the Greek for art).  This 128 page, flexi-cover collection is a must!

Portrait of a Drunk

The Man Who Grew His Beard