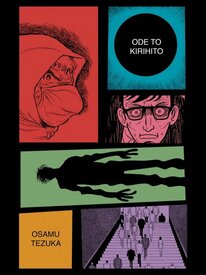 BACK IN PRINT AT LAST!  This is the big book that has it all!  Originally serialized in Biggu Komiku in 1970-71, and a personal favorite of the artist, manga founding-father Osamu Tezuka, Ode to Kirihito is a unique effort, in more than one respect.  Weighing in at a mammoth 822 pages, Ode is the first of Tezuka's works to incorporate adult themed gekiga (see Tatsumi's Abandon the Old in Tokyo) elements.  Perhaps paradoxically, it is also a work that while dealing with the darker sides of human nature simultaneously deals with Christian (Kirihito is a pun on the Japanese pronunciation of Christ, Kirisuto) themes -- specifically of overcoming the illusional dualism of beast and soul, metaphorically dealt with here as a struggle against a disease that turns men into dog-like beasts.  This book is a one-stop  for everything Tezuka as he displays a veritable cornucopia of storytelling devices, styles, page-layouts and more; if you pay attention, you will also find some fascinating foreshadowing of current alt. comics themes and representational tropes (Fort Thunder, Paper Rad, etc.).  It's a Tezuka tour de force!  He delves into a panoply of themes: most importantly that of Japanese masculinity as it confronts the sexual revolution; also explored are Japanese perspectives in the dawn of the global era as the story brings us into contact with mainland Chinese, Taiwanese, South Africans, Europeans -- but, interestingly, almost no Americans -- and we get not only Tezuka's views of these peoples but also his point of view on their views of the Japanese, creating a roundabout of perspectives.   That Tezuka fans will find this work a reading experience to relish almost goes without saying.  We'd like to take a moment here to recommend this book to those of you who are curious about Tezuka's legendary status but have been put off by his association with what is widely considered "kid's fare" -- Astro Boy, Kimba and the like.  Despite having been created over 50 years ago, Ode to Kirihito will stand up to any comparison with contemporary literary comics.  It is an engaging and intriguing tale, told by a master of the form at the peak of his powers, a work in which Tezuka at last fulfills the ambition to fully embody Dostoyevskian themes in manga that he proclaimed with his adaptation Crime and Punishment twenty years earlier.  Anyone serious about comics owes it to themselves to read this masterwork.

Record of the Glass Castle