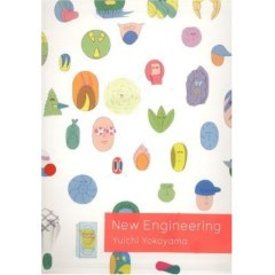 Whether you're a manga fan scouting for the best and most challenging new comics from Japan, a straight ahead comics maniac who will take good new comics wherever you find them, or a connoisseur of fine art regardless of the form it takes, New Engineering is for you.  Based in Tokyo, New Engineering creator Yokoyama is an art school graduate whose primary medium for the first five years of his career was oil painting.  He became attracted to manga because he wanted to "make serialized paintings."  As a result, Yokoyama's comics are focused on communicating his ideas from a painterly perspective, with a keen interest in the flow between images and the way in which comics/manga possess a temporal dimension that is lacking in single image painting, rather than relying on narrative.  He is, in other words, more interested in showing than telling.  Visual impact is the aim here and the images provided by this volume are clear, clean and strong; and very much engaged in forging a dialectical bond between an exaggerated western perspective and a highly iconic Japanese composition.  Interested in confronting and experiencing visually exciting work that challenges the conventions of comics, adding to its vocabulary and grammar?  Well then, there are precious few works that do this as completely as New Engineering.

This item belongs to the categories: Gift Catalogue, Pantomime Comics, International, Collections
You may also enjoy these related titles: