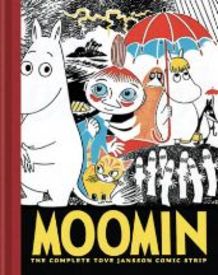 Well, if they ever decide to turn this into a prime-time animated cartoon (which would be great -- but don't hold your breath) we've got the theme song alrady picked out: "What's So Funny About Peace, Love and Understanding." Performed by, hmmm, let's say -- Shonen Knife. This Finnish strip has more in common with George Herriman's Krazy Kat that one might think just looking at it, or even upon first read; but once you let it sink in, the strip has at its core the same dedication to carefree existence, along with a simliarly oddball cast of characters. Of course, it is indelibly stamped with the character of its country of origin and Europe in general, but it's half the fun to see this spirit animated in these foreign climes. Publisher Drawn and Quarterly has this to say: "The Moomins saw life in many forms but debuted to its biggest audience ever on the pages of world’s largest newspaper The London Evening News, in 1954. The strip was syndicated in newspapers around the world with millions of readers in 40 countries. Moomin, Book One is D & Q's first volume in their projected plan to reprint the strip's run through to 1960. This is the first time the strip will be published in any form in North America and will deservedly place Jansson among the international cartooning greats of the last century. The Moomins are a tight-knit family – hippo-shaped creatures with easygoing and adventurous outlooks. Jansson's art is pared down and precise, yet able to compose beautiful portraits of ambling creatures in fields of flowers or rock-strewn beaches that recall Jansson’s Nordic roots. The comic strip reached out to adults with its gentle and droll sense of humor. Whimsical but with biting undertones, Jansson’s observations of everyday life, including guests who overstay their welcome, modern art, movie stars, and high society, easily caught the attention of an international audience and still resonate today." This is a one of a kind classic that you owe it to yourself to at least take a look at.

This item belongs to the categories: Gift Catalogue, Classic Comics Collections, International, Kid Friendly
This item is part of the series: Moomin
You may also enjoy these related titles:

The Book About Moomin, Mymble and Little My