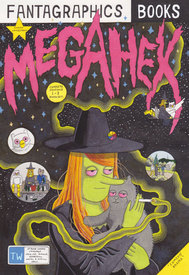 Working under the radar of North American comics fans for years, this Tasmanian native currently residing in Melbourne, Victoria, Australia, has at last crashed through the invisible barrier and has arrived on our shores with a big splash.  With his characters Megg, Mogg and Owl (along with a supporting cast foremost among whom is Werewolf Jones) Hanselmann has created the apotheosis of the Stoner Roommates Drama (SRD) that has a long and distinguished lineage dating back to Gilbert Shelton's The Fabulous Furry Freak Brothers, includes the denizens of Pete Bagge's Hate, and whose most direct precursors are to be found in the pages of Paper Rad (Ben Jones, particularly) and Matt Furie's Boys Club.  The comics here, along with those Simon has produced for 'Truth Zone' and elsewhere threaten to be the last word on the subject.  Get an idea of what we're going on about with this PDF preview, then, get up to speed with  Simon H. circa 2013, here and/or circa 2014, here.

This item belongs to the categories: Collections, Graphic Novel, Gift Catalogue
You may also enjoy these related titles: