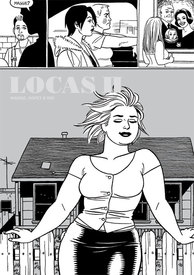 418 pages of the greatest comics of our time under one cover.  This volume picks up, roughly, where Locas left off, and collects nearly all the standard comic book size formatted work that Jaime has executed since the conclusion of the original 50-issue run of the magazine size formatted Love and Rockets.  Locas II bring together under one cover all six issues of the Penny Century series along with Jaime's contributions to the first nineteen issues of the twenty-issue run of the second volume of Love and Rockets.  Not everything from this period is here, however.  The most notable exclusion is the first work Jaime completed after the termination of L&R, vol. I, the three-issue mini-series, Whoa, Nellie!  As it was only tangentially connected to the Locas storyline, it is not collected here.  Also not included are numerous short strips – mostly one or two pages in length – that appeared in the aforementioned issues of Penny Century and L&R, vol. II, but are not related to the Locas continuity, as well as the full color, novella length work that originally appeared (slightly abridged) in The New York Times Sunday Magazine and subsequently appeared in Love and Rockets, Volume II #20. (Completists take note!)  That said, what you are getting is a big book filled with the best of the best, all laid out in a mammoth narrative arc that continues to build on the magnificent structure of past work in creating the most richly complex and deeply human work in the history of comics.

This item belongs to the categories: Graphic Novel, Gift Catalogue, Copacetic Select, Collections
This item is part of the series: Love and Rockets
You may also enjoy these related titles: