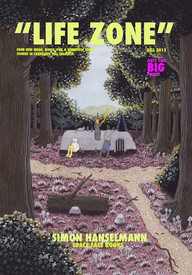 And now we head around the world and down under to enter the "Zone" created by Australian cartoonist Simon Hanselmann, who made his North American debut at CAB in November, accompanying the release of this book.  Best known here for his Tumblr smash hit comic strip, Truth Zone, which appears on Frank Santoro's Comics Workbook Tumblr, Hanselmann has - not without irony - described his work as being both "the South Park of comics criticism" and "about nervous breakdowns and horrible substance abuse".  We'd say he has created a through-the-looking-glass world to which comics readers can virtually travel to reexperience their comics reading refracted in comics by a cast of characters that function as stand-ins; a sort of Á la recherche du temps perdue for the comics set.  Here, in "Life Zone", we have "four new Megg, Mogg, Owl & Werewolf Jones stories in luxurious full colo(u)r."  Out of stock!  Looks like this is now out of print... sorry.

This item belongs to the categories: Collections, Small Press Comics
You may also enjoy these related titles: