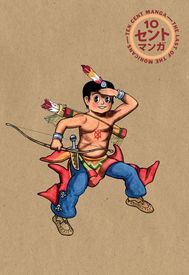 What we have here is a highly personal and engagingly idiosyncratic manga take on the early 19th century novel of frontier America by James Fenimore Cooper. It includes a thirty-six page, in-depth, illustrated essay by Holmberg, "Shigeru Sugiura and his Mohicans." This heavily researched essay provides an overview of Sugiura's career in general as well as an in-depth look  his creation of Mohicans in particular.  There is also a four page essay by Sugiura on his relationship with silent movies.  As Holmberg's essay makes clear, this 1974 work bears little similarity to the novel it purports to adapt.  It seems possible that Sigiura never even read Cooper's book.  This could be construed as one of the book's virtue's as it allows readers to participate in a series of manga riffs of Japanese consciousness free-associating on American myths as mediated by the American popular culture through which these myths were propagated in Japan.

Now at a SPECIAL SALE PRICE!

This item belongs to the categories: Graphic Novel, International, Special Sale
You may also enjoy these related titles: