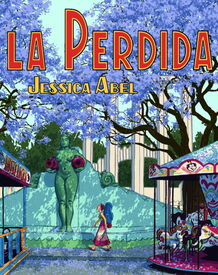 This softcover volume collects the entirety of the five-issue series published by Fantagraphics, with ammendations and corrections (and for a price that is 1/3 less than the cost of the original comics!). La Perdida -- which translates as "The Loss,"  --  presents an in-depth and unflinching look at a group of well-to-do American ex-pats in Mexico and the Mexican locals that they interact with.  The entire tale pivots around Carla, a daughter of divorce whose father was Mexican and who heads to Mexico from her native Chicago (where Abel herself grew up) "in search of her roots" -- but also because she's at a bit of a loss as to what to do with herself.  The epigraph that opens the work is from Malcolm Lowery's dark and desperate novel, Under the Volcano, and that sets the tone for what follows.  There are no heroes (or heroines) here.  What the reader is confronted with is sin and error:  selfishness; self-righteousness; ignorance; sloth; greed; exploitation; indiscriminate sex, drinking and drug use; and, finally, kidnapping and murder.  Abel has stated more than once that she was initially inspired to try her hand at comics by Love and Rockets, the work of the Mexican-American los hermanos Hernandez.  While her approach to characterization strikes us as very NYC -- and reminiscent of the early work of short story writer Deborah Eisenberg (especially Transactions in a Foreign Currency), whose latest collection, Twilight of the Superheroes, is, in an intriguing twist, thematically related to comic books -- La Perdida, by far Jessica Abel's most ambitious work to date, is clearly informed by Jaime's and Gilberto's work (especially the latter's) in Love and Rockets, and is very much her tribute to the inspiration that catalyzed her career as a comics creator.  And we are happy to report that her inspiration is alive and well here:  the characters that populate this work fairly leap off the page, providing the reader with that singular pleasure of feeling that one knows the characters better than they know themselves.  A unique mixture of sensibilities and a challenging work in its own right, La Perdida is a welcome addition to the growing body of literary graphic novels.

This item belongs to the categories: Graphic Novel, Collections
This item is part of the series: La Perdida
You may also enjoy these related titles:

Out on the WIre