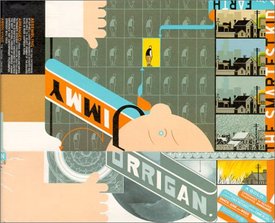 Jimmy Corrigan, the Smartest Kid on Earth (henceforth, JCTSKOE) is, first and foremost, the tale of the development of the American super-ego, it’s human cost, and its relationship to the comic book super-hero.  Ware’s choice of the Chicago Exposition of 1893 to serve simultaneously as historical signifier and the origin of his narrative is key in this regard.  It is with the exposition of 1893 -- most importantly, at least as far as JCTSKOE is concerned,  in its design and architecture-- that the USA reveals its fantasy of, and implicit ambition towards, empire in the classical Greco/Roman mold.  It was Walt Whitman’s fever dream made flesh-- or at least cast in stone.  It was here, during the glory days of the American industrial revolution, the dawn of the age of Morgan, Carnegie and Rockefeller, that the mold for the twentieth century and the USA’s dominance of it was cast.  It was here that America’s industrial strength super-ego was born, leading a generation later to the inexorable necessity of the comic book super-hero.  It is in establishing this latter connection that JCTSKOE is a true intellectual trail-blazer, revealing previously uncharted areas of our nation’s unconscious.

We will leave it to others to demonstrate, illustrate and deconstruct Ware’s panoply of formal techniques*.  It will have to suffice it to say here that Ware’s talents are formidible and their employment in this work was astonishingly acute.  The manner in which the narrative of JCTSKOE is is presented is analogous to the cut paper constructions which Ware is fond of creating and inserting into his works (see pages 21-22 of JCTSKOE for an example, albeit a modest one by Wareian standards):  the whole story is there, but the logic dictating the manner in which it is arrayed on the page is that of fitting as many pieces into as little space as possible; it’s only once you have cut it out and then pasted it together as per the provided instructions that you can see what it is.

The central narrative of JCTSKOE concerns, primarily, the four generations of the Corrigan male lineage that concludes in our present day with Jimmy.  Although we don’t actually come to it until we’re a quarter way into the book, the story begins with a brief interlude that occurs during the American civil war.  The connection of this sequence to the rest of the story is only explicitly  (yet, nevertheless, obliquely) stated in the circuitous illustrated-timeline that appears on the inside front cover-- a graphic piece-de-resistánce that it would be absurd to attempt to describe:  It is the civil war as a prelude to the great economic expansion apotheosized in the Chicago Exposition of 1893.