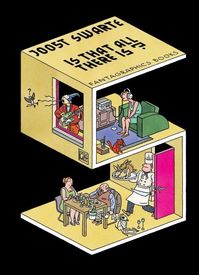 Is That All There Is?
Joost Swarte
published by Fantagraphics

Long delayed – which was no surprise; when it comes to Swarte's work, we're used to waiting – the (near) entirety of the career of Holland's pre-eminent cartoonist is now available in this aptly named volume.  Swarte made a a big splash in the US during the 1980s, appearing to wide critical acclaim in the pages of both Heavy Metal and Raw.  His instantly recognizable ligne claire style (he purportedly coined the term) is commonly associated with Hergé and his followers, but Swarte's own "clear line" style is much more closely related to that of George McManus, upon the foundation of whose consummate linework Swarte built a strongly architectural storytelling style that has had a global influence out of all proportion with the relatively tiny volume of work he has produced over his 40-year career.  In addition to his cartooning, he produced a mass of illustration and graphic design work.  And not only that – he designed furniture and at least one building!  Anyone unhep to Swarte's work should take a gander at this full-story preview.

Please Note:  This is the softcover edition. Now also out of print.

This item belongs to the categories: Gift Catalogue, Collections, International
You may also enjoy these related titles: