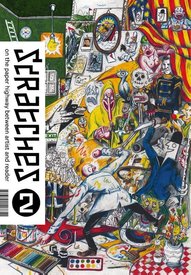 From off the back streets of The Netherlands, comes... Scratches Magazine!  Scratches is a Euro-centric comics anthology edited by RAW alum, Joost Swarte, that places a special focus on Dutch and Belgian creators.  All the comics are, however, in English.   And, yes, it does have a bit of a RAW-esque feel to it, beginning with it's oversize 23 x 33 cm (9" x 13") format that favors the vertical, and continuing with its strong production values, and most of all through the selection of work it showcases.  (It's format perhaps most closely resembles that of Drawn & Quarterly Showcse [anyone remember that?].)

ONLY FIVE COPIES AVAILABLE.  Limit:  ONE per customer.

GONE! (We may [or may not] be able to get more.  Should you be interested, please send us an email with Scratches 2 in the subject)

This item belongs to the categories: Anthologies, Gift Catalogue, International
You may also enjoy these related titles:

Is That All There Is?