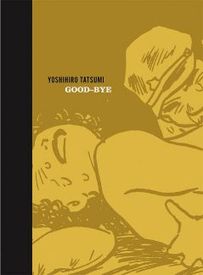 Good-Bye, the third volume in Drawn & Quarterly's series collecting the work of this manga master who pioneered the dark, mature (noir, if you will) genre of manga known as gekiga during the years that followed the cultural upheavals of 1968, has been released in tandem with Red Colored Elegy as the work it contains was produced during roughly the same historical moment.  This volume collects storieds originally published during 1971 and 1972 and contains some of Tatsumi's best work.  The introduction, by America's foremost expert on the history of manga, sets the work in context and gives the reader a good perspective from which to get the most out of the stories that follow.  Those who missed the first two volumes in this series, The Pushman and Abandon the Old in Tokyo (both of which are still in print and available here at Copacetic), are encouraged to take a look at this one, as it's the best yet.  Sceptical?  Check out this nice nine-page preview.

The Push Man and other stories

Abandon the Old in Tokyo