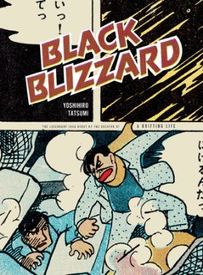 Here we have a classic bit of pulp comics – perhaps better thought of as proto-gekiga – from Japan.  Produced and originally released in 1956, this 128 page hardboiled manga was, according to Tatsumi, drawn in a mere 20 days of non-stop creative fury when he was only 21 years old.  Yet, despite his tender age he had already produced seventeen book-length manga prior to this one.  It seems almost superhuman to have completed so much work so young, but he had clearly cut his storytelling teeth by the time he did Black Blizzard, as it is expertly paced for that quick pulp fiction rush.  D & Q's in house Tatsumi point man, Adriane Tomine, made a smart design decision to package this work in the guise of 1950s paperback; it works.  Unfortunately for us readers, it's not priced like one.  Ah, well.  We here at Copacetic like this one enough to meet our customers half way, by offering a 25% discount – at least for now.  While you're mulling it over, download a PDF preview here, and learn more about Tatsumi's other works, here.

The Push Man and other stories

Abandon the Old in Tokyo