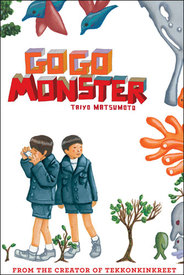 Here's a lushly produced 455 page hardcover graphic novel of the inner life of an introverted elementary school child whose life as depicted in these pages is filled with the compulsive fantasies (or are they just fantasies? perhaps they're something more... [see below]) that have, in many cases (perhaps Matsumoto's own), led in their turn to the compulsion to draw and bring them to life that has launched many a cartoonist's career.  Looked at from another angle, it can be seen as a childhood take on the Philip K. Dick paradigm that pits an atypical personal/subjective reality against consensus/objective reality, in which the protagonist and those around him question his sanity but the readers are led to wonder on which side the reality lies, with the answer ususally being... both!  Should you be interested in learning more about this intriguing work, you're in luck as there is this fine review by Sean Collins, and interested readers may find that wading through this long Brian Chippendale post about his recent tour to Japan (among other places) to read his thoughts on this and other Matsumoto works.  Either way, you'll see that this work has inspired some highly engaged responses.

Now out of print!