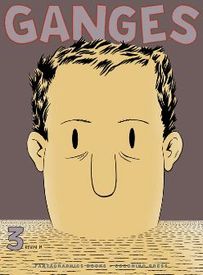 It's time for comics connoisseurs to crank up their cogitation once again, as a new issue of Ganges is in stock and on sale here at The Copacetic Comics Company.  And the verdict?  Kevin Huizenga once again delivers the goods!  This time around we have the inner workings of an agitated mind – that of Glenn Ganges, to answer your question – at the edge of sleep, visually embodied as its own cartoon being, distinct and separate from – if in many respects identical to – the body housing this mind.  All readers who have ever had a rough time falling asleep and have had their mind wander to and fro seemingly of its "own" accord will have plenty to relate to here, and there are indeed many comic moments in this comic book, BUT there is also much food for thought, along with a poetic evocation of middle-American suburban landscapes as dreamscapes that shows Huizenga slowly feeling his way towards integrating some weightier emotional content into his analytics.  In dissecting the mechanics of consciousness on the precipice of sleep, as the waking mind gradually lets go of sensory input and transitions to a period of internal synaptic data transfer, Huizenga once again strives to put the language of comics to novel uses.  The layers of consciousness are first depicted and then explored as metamorphic strata composed of distinctly variant degrees of abstraction; memories transform into imaginings which then turn in on themselves in auto-analyses all prompted by the slightest shifts in the tectonic plates of self-awareness.  This is a comic that not only can, but demands to be read over and over again.  There is so much going on here that each reading will turn up something that was missed before.   Here is work that is powering comics forward, and that should not be missed by anyone who want to see where it's going.  Anyone interested in delving further into this work is encouraged to read Rob Clough's in-depth review for The Comics Journal, HERE.