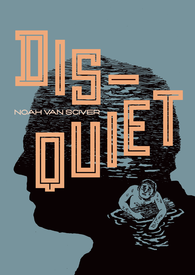 More Noah Van Sciver!  Here's the second book collection -- the first in hardcover! -- of Noah Van Sciver's short work.  After a two-page intro, Disquiet gets off to a great start with Noah's mini-masterpiece, "The Lizard Laughed", originally published as a riso mini by Oily Comics.  It then goes on to collect a variety of works that had previously appeared in Blammo, along with "The Death of Elijah Lovejoy", which appears here in color for the first time, as does "Untitled" which had previously seen the light of day only in a small run mini, and a few other short pieces as well.  The two color works that close out the volume, "Night Shift" and "About the Artist" were both new to us here at Copacetic.   136 pages in all.  Debossed cover!

This item belongs to the categories: Collections, Small Press Comics
You may also enjoy these related titles: