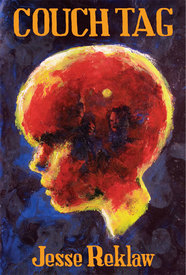 Jesse Reklaw's long-in-the-works Fantagraphics graphic memoir has at long last arrived.  Divided into five lengthy chapter/ pieces – at least one of which ("Thirteen Cats of My Childhood") he self-published (way back in... 2006?).  Four are presented here in a midnight blue pen & ink brushed ink wash tones, and the last – "Lessoned" – in a raging full-blast of color.   The tone here ranges from whimsical to deranged as childhood, adolescence and young adulthood are revisited.  Parents, relatives and friends are viewed through the respective prisms of each of these life stages, making for a multipoint perspective that provides some interesting contrasts.  Readers who got into Alison Bechdel's Fun Home, Dash Shaw's Bottomless Belly Button, Joe Matt's Peephole and/or Chester Brown's The Playboy and (especially) I Never Liked You are likely to get a lot out of Couch Tag.

We've long been fans of Jesse's work here at Copacetic, and we're now going all out and offering Couch Tag at a SUPER SALE price!

This item belongs to the categories: Gift Catalogue, Graphic Novel, Special Sale
You may also enjoy these related titles:

The Big Feminist But: Comics About Women, Men and the Ifs, Ands & Buts of Feminism

Ten Thousand Things To Do