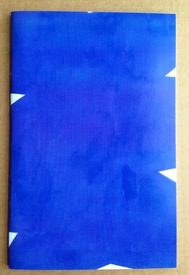 Cold Heat closes in for the kill with another double issue.  This one brings the series one double issue away from completion.  After the massive action blow-out of #5/6, this time around we have more of a culture jam as the saga crosses international boundaries when Castle & Co. head to the southern hemisphere, accompanied by the BBC.  The modern condition of living in the global village is given the Cold Heat treatment as well.  Land lines and laptops, mobile phones and desktops, the internet and intensive care units, wifi and the web, credit cards and music festivals, airports and hotel rooms, Starbucks and taxi cabs,  bright beaches and dark alleys – all seamlessly connect to form the all-encompassing phenomenological envelope that passes for reality in the 21st century.  As always, series artist, Frank Santoro takes chances – starting, most obviously this time around, with the front cover, which invokes Ellsworth Kelly and Ad Reinhardt while highlighting the "thingness" of a comic book – as he pushes and pokes at the formal elements that make up the current corpus of comics in his ongoing challenge to the received wisdom that constitutes contemporary comics orthodoxy.  The images we've selected to illustrate this listing focus on one of Santoro's greatest strengths:  that of exploring the many avenues open to graphically rendering interior subjective states of mind beyond mere mastery of facial expression.  The many faces of Castle on display in the pages of Cold Heat embody of the struggle to forge new tools to place in the comics craft toolbox, making each issue of the series double as a workshop – and none moreso than this one.  There's an aspect to the experience of reading Cold Heat that feels like being taken behind the scenes to see how it's done while the action never stops happening all around. It's like bringing you right there on the set while they're filming yet still managing to maintain the manufactured illusion of the movie.   This issue has a terrifyingly low print run of 100 copies, so delay purchase at your own risk.

This item belongs to the categories: Small Press Comics, Copacetic Collectibles, Copacetic Select, Made in Pittsburgh
This item is part of the series: Cold Heat
You may also enjoy these related titles: