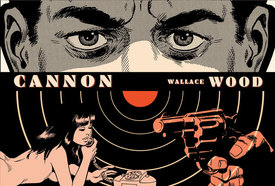 In some respects, Cannon could be seen as the end of romance – with a motto somewhere along the lines of "make war, not love (have sex)" – in which purely male concerns have usurped any hope of an enduring, loving rapprochement between the sexes.  Comic book men don't get any more manly than Cannon.  Created by Wallace Wood for a primarily military readership, Cannon started out in a one-shot comic book, Heroes Inc., in 1969, before going on to be serialized in the U.S. Army's Overseas Weekly, beginning in 1971.  Big men with guns and naked women are the signature tropes on display in this Vietnam War era series, which was imbued with cold war themes of communists and brain-washing, with some fairly negative hippie stereotypes thrown in for good measure.  Clearly, these themes resonated with Wood, one of the titans of the Atomic Age of comics, and he turns in some forceful, engaging work that provides as vital a portrait of this particular mindset as one is likely to find; yet it is a mindset that is clearly tinged with bitterness (see a naked woman, fire a gun; repeat).  Taking a historical perspective on this work, viewing it as a report from the cold war trenches, wherein sexism with paranoia on the side was the norm, can provide mitigating benefits.  While we may have long since emerged to our current, relatively enlightened age, the allure of the behaviors and values on display here remain, albeit in altered forms.  As William Faulkner so notably said, "The past isn't dead.  It isn't even past."  If you think you're tough enough to handle it, check out this 27 page PDF preview.

Came the Dawn and Other Stories