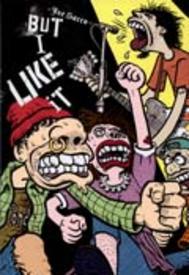 But I Like It
Joe Sacco
published by no publisher listed

Here it is, a hardcover collection of the early years of bacchanalian debauchery in the wide wild world of underground rock followed by some later somewhat more sedate years of Rolling Stones stadium rock and Fat Possum blues.  While this work stands -- at least superficially -- in fairly stark contrast to the political reportage for which Sacco is now most well known, it provides  perhaps the best look at his inner self and serves to reveal -- to anyone paying attention -- some of the sources of the motivating forces for this later politcal work upon which his reputation rests.  Also included in this volume are 20 one-pagers originally done for the Swiss magazine Agenda, appearing here for the first time in English!  Any Sacco fan should at least give this the once over.   Comes with a live Miracle Workers  ep-length CD.