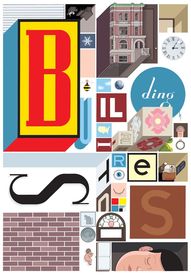 Well, if you're only going to read one comic book this year... then you are going to have to steer clear of this one!  That's because Building Stories is a box set of fourteen separate comics pieces, including two hardcover books, pamphlet style comics, accordion fold-outs, newspapers, flip books, a gameboard-esque piece, and more (check out the accompanying illustrations to get an idea).  In his relentless quest to up the ante of what comics are capable of pulling off, Mr. Ware has  pulled out the stops, called in the reserves, and put the Acme Novelty Company on a wartime footing to forge this massive meditation on the parallels between the three-dimensional interior spaces in which Americans of the comic-reading variety spend most of their lives and the two-dimensional spaces onto which our interior selves are projected in the form of comics characters. This colossal effort has, in turn, inspired the editors of The Comics Journal to go town in celebrating its release byassembling a high-powered coterie of critics to deconstruct this multifaceted architectural artifact.  So, you have the option of heading straight there to start digging in, or (the Copacetic recommendation) waiting until you yourself have spent some quality time of your own with this massive project before heading over to TCJ to compare notes.  Either way, get ready for a comics experience like none other.