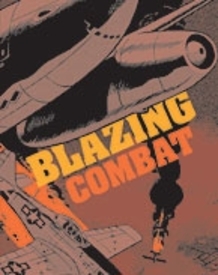 Here's the official Fanta hype: THE LEGENDARY ANTI-WAR COMIC COLLECTED FOR THE FIRST TIME IN ITS ENTIRETY. Written by Archie Goodwin and drawn by such luminaries as Frank Frazetta, Wally Wood, John Severin, Alex Toth, Al Williamson, Russ Heath, Reed Crandall, and Gene Colan, Blazing Combat was originally published by independent comics publisher James Warren in 1965 and ’66. Following in the tradition of Harvey Kurtzman’s Two-Fisted Tales and Frontline Combat, Goodwin’s stories reflected the human realities and personal costs of war rather than exploiting the clichés of the traditional men’s adventure genre. They were among the best comics stories about war ever published. Blazing Combat ended after its fourth issue when military post exchanges refused to sell the title due to their perception that it was an anti-war comic. Their hostility was fueled by the depiction of the then-current Vietnam War, especially a story entitled “Landscape,” which follows the thoughts of a simple Vietnamese peasant rice-farmer who pays the ultimate price simply for living where he does — and which was considered anti-war agitprop by the more hawkish members of the business community. Get a better idea of what's going on here with this generous 19-page PDF preview that contains three complete stories!  Writer Archie Goodwin and the original publisher James Warren discuss the death of Blazing Combat and market censorship as well as the creative gestation of the series in exclusive interviews.   208 page hardcover  ONE COPY IN STOCK (remainder mark across top page edge)

Corpse on the Imjin and Other Stories

Came the Dawn and Other Stories

Genius, Isolated: The Life and Art of Alex Toth