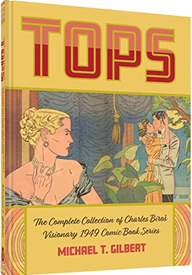 Hold onto your hats!  Here we are treated with an enormous (11" x 15") hardcover volume collecting the entirety of the rare and largely forgotten comic book series, Tops!  Conceived by Charles Biro (of Crime Does Not Pay fame) and published by Lev Gleason in 1949 in an oversized magazine format, Tops, was a decidedly experimental project that aimed to bring comics to a wider – and older – audience.  In fact, Biro and Gleason worked to escape the pejorative associations of the label "comics" by billing Tops as, "The Adult Magazine of Dramatic Picture Stories," and labeling the cover-feature of the first issue as a "novel-length illustory". And they backed up these claims by creating some relatively challenging, adventurous and adult(with a decided slant towards the male)-oriented comics – with titles like "I'll Buy That Girl," "You're on the Parole Board," "The Closet," "Marriage Swap Shop," "Summer Waitress," and "How You Would Live Under a World Government"(!) – scripted by Biro and a cohort of writers and drawn by first rate talents like Reed Crandall, Dan Barry, George Tuska, Bob Fujitani and Fred Kida, among others; these were interspersed with short stories and text pieces penned by non-comics writers (including one by Dashiell Hammett!).

Tops was destined to be a short-lived experiment, as it lasted only two 68-page issues.  Likely due primarily to its uncategorizable nature, the fact that it was priced at a quarter at a time when practically all other comics were a dime, and the simple physical fact that it was too large to be racked with standard comics (or had to always be placed in the back row so as not to obscure all those behind it) and so was likely placed with the larger weeklies like Life, Look and Time, etc.  This was probably part of the idea behind Biro and Gleason's brainstorm: to attract the (large and untapped by comics) readership of these mainstream magazines to comics.  The failure of Tops to do so seems to confirm that comics readers are a breed apart.

Copies of these two issues of Tops have been notoriously difficult to get a hold of, due, again, in large part to their physcial size – as they can't easily be stored and/or displayed with other comics, and so tended to be stashed with Look and Life in where comics fans wouldn't think to look.  Thus, their relative inaccesability led them to have been largely ignored by comics collectors and scholars... until now!

This compilation is edited by historian and cartoonist Michael T. Gilbert and includes the entirety of both issues along with an introduction by Gilbert, as well as several other essays providing background on the creation of the series and the publisher, editors, and cartoonists who realized it.  As an added bonus, it also includes a chronicle in essay form of experimental, adult comics endeavors throughout the first half of the 20th century.

Get ready to dig into a missing chapter in comics history.