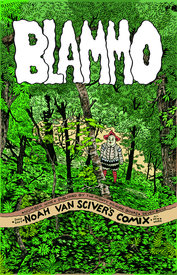 Maestro Van Sciver enters middle-age and hits his stride here in the ninth issue of his auteurist anthology, Blammo.  This issue is packed cover to cover with comics tightly corsetted by a requisite inclusion of those ancillary aspects associated with the traditional comic book form.  Starting with the enigmatic clown in the woods cover image that is backed with an inside front cover full of pæans of praise to his work from top comics professtionals, the issue then plunges straight into 44 consecutive pages of solid comics storytelling that brings readers a dazzling dozen distinct pieces woven together into crazy-quilt whole.  The issue is bookended by a pair of meta-Blammo tales featuring "The Writer and the Artist".  It also includes a series of short pieces that are woven throughout the pages:  a trio of one-pagers featuring "The 19th Century Cartoonist (Notable and Tasteful)"; a couple of comics adaptations of stories told to Noah in his youth by his dad; a comics-y three-page adaptation of "The Town Mouse & the Country Mouse"; and a one-page "Funny Animal Comic".  Those pieces are the threads that bind together the three main works:  two auto-bio pieces – a multi-levelled seven-pager about attending a comics festival, and a ten-pager about experiences as a comics fellow in White River Junction, Vermont that ranges from micro-aggresions to the meaning of life – and the issue's centerpiece, the 16-page, "Little Bomber's Summer Period," in which Van Sciver skirts the edges of Tomine Territory with a nuanced, character-driven tale – finely seasoned with anger and bitterness – of contemporary life in these United States. The issue then exits with a whacky fun-page brought to you buy a few plugs for Van Sciver's in-print catalogue and then closes with a back cover strip that serves as a coda for the issue as a whole.

Blammo #9 is a comic book for our times.

This item belongs to the categories: Small Press Comics, Copacetic Select
You may also enjoy these related titles:

The Complete Works of Fante Bukowski