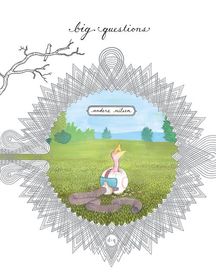 The tiny seed that was planted in the back of Mr. Nilsen's mind during the course of an artist workshop exercise that took place at the D.H. Lawrence Ranch in Taos, NM in 1996 has now at last reached its maturity in this sequoia-like 592 page tome that collects the entire continuity originally published in the (mostly) long out of print series.  The first six issues were self published before Drawn & Quarterly – the publisher of this collection – picked it up and added the series to their then burgeoning but now defunct series of regularly published pamphlet comics.  Big Questions defies easy categorization, and many have written much about the original issues  (including, in brief, us). We have yet to get around around to saying anything intelligent about Big Questions in its collected book form, but will happily cede the floor to Anders himself in this interview posted on CBR where he talks about his comics career and answers questions Big and small.  The uninitiated are encouraged to read this brief, yet poignant PDF preview.

This item belongs to the categories: Graphic Novel, Collections
This item is part of the series: Big Questions
You may also enjoy these related titles: