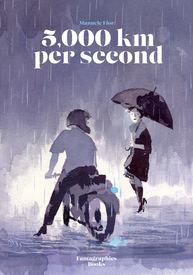 Winner of both the grand prize at the Lucca Comics Festival and the award for best album at the Angoulême Comics Festival -- in 2010 and 2011 -- respectively, 5,000 km per second at long last makes its English language debut in this hardcover edition from Fantagraphics.  Fior is an accomplished watercolorist who here employs a finely nuanced color palette in telling the story of a complex young love that is also the story of growing up as it follows its protagonists' across the years and across the continent of Europe and into Egypt in a series of gradual shifts and abrupt jumps.