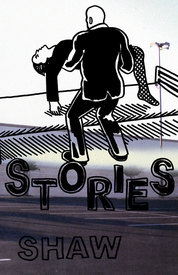 A companion piece to Dash's New School, this 32 page full color comic book is printed on flat white stock, that employs the same formally innovative, layered approach to coloring that adds new depths to the comics page.  3 New Stories offers an emphatic corollary to New School, reinforcing its assertions in the form of caustic cautionary tales warning of the human costs inherent in the maintaining of current power relations built on outmoded distinctions derived from place; employing the same dialectical approach to accent the stark ironies in the three full color works contained in this 32 page, standard-pamphlet comic book.

The opening story, "Object Lesson" is a true contemporary cautionary fable, entirely unlike those rehashes posing as such published by Vertigo and the like.  A reader might at first think they had stumbled into a new tale designed to thrizzle by Michael Kupperman, as the story opens on a character dressed like Sherlock Holmes arriving home to his family and declaring, "I've been laid off," (cue laffs) but this impression evaporates as readers quickly realize that they are being confronted with some of the most trenchant irony ever employed in comics and the story heads into a heart of darkness where America eats its young (and old). The 2012 Eisner Award nominations have only just been made, but we are already prepared to nominate "Object Lesson" for the best short story of 2013. Recommended!