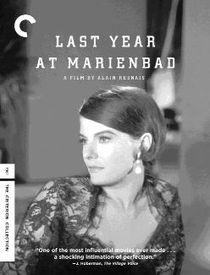 directed by Alain Resnais from a screenplay by Alain Robbe-Grillet w/ Delphine Seyrig and Giorgio Albertazzi  <<<•>>> There are few truly one-of-a-kind films.  By any measure,  Last Year at Marienbad is clearly one of them.  A film that is successful like none other in recreating a mental landscape, that shows the inner workings of a restless mind and haunted memory, that employs the language of cinema to probe the interior twists and turns of consciousness, that demonstrates how thought is action in a manner that, while tempermentally quite different from, may yet be considered the most successful translation of the Proustian approach to narrative in any film yet realized.  Here, in L'année dernière à Marienbad, like in Á la recherche du temps perdue, we are confronted with a life turned inside out.  Robbe-Grillet, Resnais & Co. managed a feat that has yet to be repeated, and now we are presented with the – for now – definitive DVD edition, courtesy of The Criterion Collection (who else?).  This is a two-disc edition with some interesting and worthwhile extras – including two short Resnais documentaries from 1956 & 1958 – but all pale next to the glory of the restored high-definition transfer of the film itself.  Your film education is incomplete until you've seen this film.  And this is also one film that can quite decidedly stand up to repeated viewings, as its aesthetic pleasures and intellectual challenges are not easily exhausted.

This item belongs to the categories: Gift Catalogue, Copacetic Select
You may also enjoy these related titles:

Stranger than Paradise
I Vitelloni
Mamma Roma
The Lower Depths