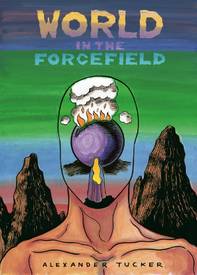 World in the Forcefield
Alexander Tucker
published by Breakdown Press

Here's the official word, from the publisher:

The artist and musician Alexander Tucker returns to comics with World in the Forcefield 1, a tale of existential boredom set in a fantastical universe. The book explores perception and inter-dimensional reality in a tale of two estranged brothers sharing a world populated by giant godheads who seek a era of perfect boredom, and strike out with random acts of cruelty to create chance events that spark their fellow inhabitants’ destinies.

“I use improvisation to develop structured storylines and automatic processes like cut-ups and unconscious image-making to trigger future events within the comic. I wanted to create a universe where the mundane and the epic sit side by side. I was inspired by Steve Ditko's meta-beings and Gary Panter's deconstructed worlds, as well as a deep love for the engravings of Gustav Doré and William Blake’s drawings” - Alexander Tucker.

Known in the comics world as co-founder of the arresting comics anthology Sturgeon White Moss alongside Sylvia Farago (the name of the collection came to Tucker in a dream), Alexander Tucker has also released six critically acclaimed solo albums with Thrill Jockey Records and ATP Recordings, is co-founder of experimental pop duo Grumbling Fur and one-half of radiophonic tape loop project IMBOGODOM. He has collaborated with musicians Charlemagne Palestine, Stephen O Malley of SUNNO))), and fine artists Mark Titchner and Marvin Gaye Chetwyn.