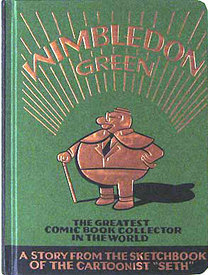 Sub-titled, "The Greatest Comic Book Collector in the World," this is a book that will be as appealing to long time comic fans for its endearing portrait of the obsessive collector mindset as it will be to the general reader with its entertaining story and cast of characters.  And the production of this book is a delight for the senses.  You really have to pick it up and hold it in your hands to fully appreciate what a fine job they did with this one. Seth has clearly been absorbing the work of his peers as well as his precursors and is finally moving beyond his trademark schtick of  melancholy loners -- although he's certainly not abandoning it, as it permeates this work as well, only now it's moved below the surface.  The dense repetitive layouts of Chris Ware are here combined with the device pioneered by Dan Clowes in the last two issues of Eightball of creating a crazy quilt narrative of a series of sequentially juxtaposed short pieces.  Within this structural framework Seth has built an entertaining narrative that is highly reminiscent of some of the classic Uncle Scrooge tales by Carl Barks as well as the longer Little Lulu and Tubby adventures by John Stanley.  In other words:  If you like comics, you'll like Wimbledon Green.

Only a couple oc copies left!

This item belongs to the categories: Graphic Novel, Gift Catalogue
You may also enjoy these related titles:

The New World: Comics from Mauretania