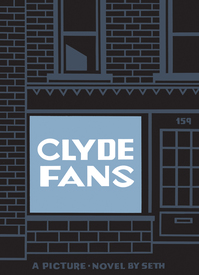 Twenty years in the making, serialized entirely in the pages of his one-man anthology comic book series, Palookaville, Seth's career-spanning magnum opus has at long last reached its final destination in this deulxe (Seth-designed, 'natch) slipcased hardcover edition.  Twenty years represents a hefty chunk of any artist's career, and in Seth's case, it is a long enough period that you can see both his art style and his approach to storytelling significantly change and evolve over the course of the work, which in and of itself makes for an interesting – and rarely encountered –added layer to the Clyde Fans.  Unsurprisingly, Clyde Fans has garnered plenty of reviews, including this one in the NY Times, and this one in the Globe & Mail, that includes a brief interview with Seth.  And, for those unfamiliar with thiswork, BoingBoing has provided a brief preview of this 488 page epic that is taken from the earlier period of its execution.  And, The Believer Magazine has just published an interview with Seth.

This item belongs to the categories: Gift Catalogue, Graphic Novel, Collections
You may also enjoy these related titles:

The New World: Comics from Mauretania