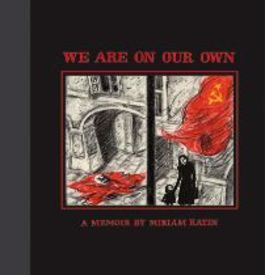 retail price - $19.95
copacetic price $18.88
We Are On Our Own
Miriam Katin
published by Drawn and Quarterly

This is a comics memoir of a Jewish mother and child's persecution and flight in Hungary in the last year of the Second World War.  It is a harsh story of pain and persevering, of suffering and survival against the odds that is written and drawn by the grown child and bracketed by scenes of her own motherhood safely ensconced in the United States.  A unique endeavor from cover to cover, the story is told entirely in rugged pencil drawings that eloquently testify to the strength of its actors.  This attention to matching form and content continues in Tom Devlin's thoughtful design of the book itself.  Holding the book in one's hands, one immediately feels that its origins are in a harsh world filled with privation that is quite alien to the sleek comforts amidst with we comport ourselves in America today.