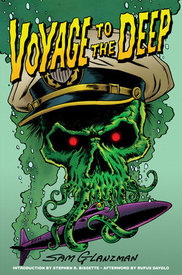 This classic of the Cold War era has just been reissued by IDW in this 176 page full coilor hardcover.  Originally published  in 1962-1963 by Dell Comics, in a series of four 12¢ comics books, Voyage to the Deep presents a science fiction of tale of man-made climate catastrophe, which, in the context of the Cold War, is represented as originating as a commie plot from which a group of heroic American submariners must save us!  As Steve Bissette's in-depth, illustrated introduction explains, this particular theme was rooted in the then-widespread fascination with the nuclear submarines that also provided the impetus for movies such as The Atomic Submarine, and most germane to this comic book, the televsion series Voyage to the Bottom of the Sea.  What sets Voyage to the Deep apart, is the riveting  art by Sam Glanzman, whose spectacular depictions of catastrophic flooding are visually conflated with the end of civilization(s) to make for a unique reading experience.

This item belongs to the categories: Classic Comics Collections, Gift Catalogue, Graphic Novel
You may also enjoy these related titles: