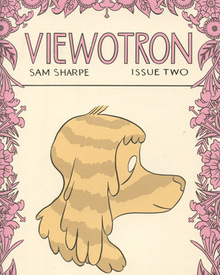 The second – and final – issue of the first volume of Sam Sharpe's Viewotron series makes for a tough read, but it is an excellent work of comics.  "Mom" is a harrowing, issue-length auto-biographical tale of growing up and coming to terms with a parent suffering from schizophrenia.  When you have finished reading it, you will have a good sense of the significance of the phrase, "Walk a mile in my shoes."  It is a story you won't soon forget.

This comic was originally published way back in 2013 (and reprinted in 2015), but we sold out in the shop before we managed to post it here.  It took us a lot longer than we expected to get it back in stock, but we kept looking until we finally did.

Here's the review from its co-publisher, Radiator Comics:

Sam Sharpe designed his Viewotron series to be a one-man anthology, collecting short comics by himself and any comics friends he invites. Viewotron #2 is devoted to a moving and troubling story of growing up with a parent who has a mental illness. Growing up, Sam only knew his mother through confusing letters she would send. Sam’s story, “Mom” chronicles his relationship with his mother, Jean, in his late teens and early twenties, when they reconnected.

It can’t be easy to write about such a personal subject, but Sam’s storytelling shines in this comic. Sam’s story focuses on a few scenes from a decade of interactions. This way he expresses larger issues and emotions, rather than provide a laundry list of difficult events. Many people have praised this as his best story to date.

The art provides a great deal of the emotional heft behind the story. The choice to draw everyone as anthropomorphic animals actually humanizes the story more. Cartoon animals are familiar to us all, so Sam’s drawings feel more natural and real than if he had attempted to draw the story with cartoonish people -which could have created a barrier between the reader and the subjects. Floral arrangements decorate pages that feature narration, which on first read suggests a stereotypical “female” decoration, but subsequently makes one think of floral arrangements at a funeral or wake, suggesting a great loss.

I think the strongest visual choice, and the most troubling, is the way Sam drew his mother’s eyes. Every character’s eyes in “Mom” are expressive, indicating moods of Sam and those with whom he interacts. Jean’s eyes are large empty disks, which are unreadable, and make Sam’s mother seem inaccessible.  That is the major theme, and true tragedy of this autobiographical tale, the attempt and inability to connect with someone you should be most connected to.

This item belongs to the categories: Copacetic Select, Small Press Comics
You may also enjoy these related titles: