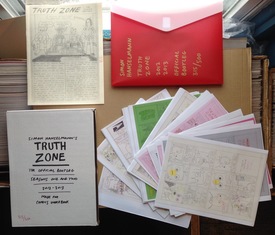 After a lengthy lull, the AWOL elves formerly at Comics Workbook have been located and are now, at long last, once again at work producing the remaining numbers of this 500 copy limited edition, the production on which was halted before completion.  We have managed to reserve the current production of these hand-assembled collections, and they are now being delivered to us as they are completed.  Each is stored in a one-of-a-kind hand-lettered box, depicted on lower left in the photo.  Each box set contains all 91 Truth Zone strips that appeared on Comics Workbook in 2012 and 2013.

These caustic – and hilarious – one-page strips are the comics that introduced Simon Hanselmann – along with Megg, Mogg, Owl and Werewolf Jones –  to his American audience.  They will also be of special interest to long time alternative comics readers, as many of these strips skewer creators, publishers and other figures on the alt comics scene, as it was constituted at that time.  These one-page strips are collected on individual, unbound plates, portfolio style.  Each box set also includes a booklet prepared especially (and exclusively) for this edition by Mr. Hanselmann, in which he offers his own commentary on each of the strips.  All are stored together in a unique hand-lettered, snap-close, vinyl portfolio envelope, depicted on the upper right, which fits snugly inside the box (Please Note: the color of the snap-close vinyl portfolio will vary from box to box and so may be different from what is pictured).

This is a hand-numbered, limited edition of 500 copies (of which roughly 60 remain, FYI)

We sold all the in-house copies over the holidays, but more copies are currently in the process of being assembled and we expect to have them soon, so please check back!