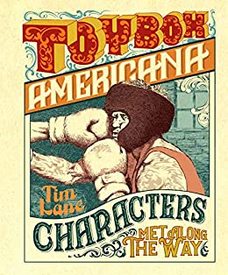 With Toybox Americana, Tim Lane continues on his epic artistic journey to chronicle his vision of America.  It is a combatively pre-postmodern vision that centers on people rather than process, one that valorizes content over form.  Here in the pages of Toybox Americana, as elsewhere, Lane focuses on the common man (and, if to a substantially lesser degree, woman), before their consciousnesses were colonized by psychologically invasive mass medias, when they were grounded in their environments and saw themselves in situ.  Yes, these environments were harsh but this harshness held within in the capacity to be ennobling – if only momentarily.  Character is here forged in the crucible of experience, and experience, for the common people of America is often harsh and sometimes cruel; people are often pushed to the edge, and sometimes over, into the abyss.

The bulk of this 250+ page oversize hardcover volume, which has something in the way of a coffee table book feel about it, is devoted to a series of illustrated vignettes produced for the Riverfront Times in St. Louis from 2004 through 2009 under the heading, “You Are Here.”  These were, more or less, a continuation of a similar, but brief, series that he has produced for the New York Press in 2002, under the heading, “Intersection.”  (Lane walks readers through the history, background and intent of these series in his informative introduction to this volume.). These pieces are, just to be clear, composed of a spread with a short, one-page text piece accompanied by a single full page illustration.  Having trouble visualizing what these look like?  Not to fear!  Several of these illustrated vignettes are available for preview here (following the complete text of Lane's introduction, "Read This First").  So, anyway, regardless:  not comics.  But… accompanying these there are approximately 50-60 pages worth of  “experimental vignettes” and “graphic feature stories” which are, for the most part, comics.