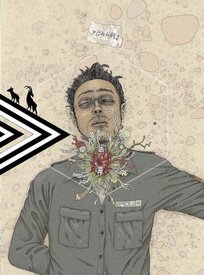 In the second issue of Anders Nilsen's new epic, Tongues, tensions ratchet up several notches across the board.  What, exactly, is going on?  It's hard to say with any kind of certainty – but that's the point.  What we are shown are the multiple, intersecting planes of colliding realities: of the mythic and the mundane; of imagination and conspiracy, of street and sky, of home and horror.  All is intricately rendered, resonantly colored and put together in a thoughtfully designed, oversize package that captures a sense of the porous nature of the borders that humanity constructs, pointing out that they are, finally, endlessly mutable abstractions.  And this series is only just getting started.  Plug in, buckle up and get ready for a long haul.

This item belongs to the categories: Copacetic Select, Small Press Comics
This item is part of the series: Tongues
You may also enjoy these related titles:

God and the Devil at War in the Garden