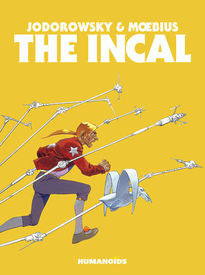 Perhaps the single greatest science-fiction-adventure bande dessinée series of all time, the six-volume series that was originally published in France throughout the 1980s has at last been collected in its entirety in a single 316 page softcover volume for a price that works out to less than $4.50 per volume – barely more than a standard American comic book.  Massively influential (see Brian Michael Bendis's introduction cum rant), The Incal has informed many a popular culture work, across mediums:  films, television series, and books, in addition to the countless comics, manga and graphic novels  tha have been influenced and/or informed by this Jodorowsky-Moebius masterpiece.  While the page-size is here slightly reduced from the original, the magnificent colors – along with their registration and reproduction – are of high quality and enable the reader to plunge right into the definitively fantastic Moebius art that propels the twists and turns of the epic Jodorowsky plot in this now definitive English language edition.

And, we also have (had!) copies of the "exclusive" Direct Market Edition, HERE.

Both softcover editions are now, sadly, out of print.  Here's hoping that Humanoids does a reprint (at least of this one).

The hardcover edition is still available, at least...

Moebius Library: The Art of Edena