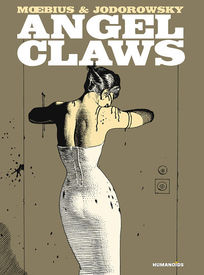 Take a disturbing trip through the psycho-sexual side of Moebius, with Jodorowsky as your guide, in this fairly decadent, very European take on embodiying masculine fantasies in feminine form –  if you dare!  The black and white, pen and ink drawings that make up this volume were, for the most part at least, originally executed between 1992 and 1994.

Here, the process of composition was initiated by the drawings alone, which were done by Moebius in isolation.  He then shared them with Jodorowsky, who took up the challenge of forging a linking narrative (and likely provided the title); it's up to the reader to decide how successful he was.  While the work as a whole more or less falls into the category of Eurotica, Moebius is such an exceedingly talented artist that he has endowed the drawings with a hypnotic quality that hold the viewer's attention and demand that their significance be contemplated, which, we feel obligated to state, is not altogether without danger, as there are obsessive/compulsive and sado-masochistic elements present throughout.

According to the afterword by Pablo Picasso's grand-daughter (!), Diana Widmaier-Picasso, Moebius burned all the original pages after the completion of this work, indicating that he was trying to purge this aspect of his being and thereby implying that he thought they were unhealthy or harmful.  You have been warned.

Please Note:  contains graphic sexual imagery; adults only. Also: will likely be considered highly sexist and extremely patriarchal by some, perhaps many. Thus: this work may perhaps most profitably be read in the spirit of researching European male sexuality.

The level of artistry displayed by Moebius here is spectacular, regardless of the problematics of the images thereby created.   The nature of the connection between the form and the content is the ultimate mystery it presents.

Moebius Library: The Art of Edena