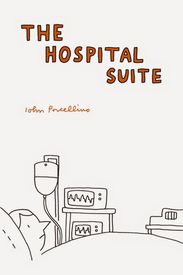 The first original, all new graphic memoir by John Porcellino is here.  Unlike previous books by Porcellino, which were all culled in  part or whole from issues of his long-running King-Cat Comics and Stories series, everything (except for four short pieces in the appendices, which most people will not have seen) in Hospital Suite appears here for the first time.  It is divided into three novella-ish sections, each of which confronts a health crisis in John's life.  The titular "Hospital Suite" provides an overview of John's first major health crisis, a mystery of pain and suffering that descended without warning; "1998" focuses on the events of this year where sounds become painful followed by the onset of OCD; and "True Anxiety" shows what happens when OCD collides with post-9/11 atmosphere of paranoia and fear.  This may sound like a giant bummer of a read, but it's not; in true King-Cat fashion, the silver lining in each cloud is revealed, and each crisis is transformed into a spiritual journey towards inner peace.