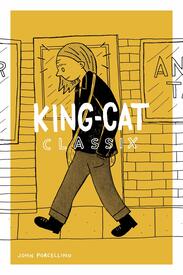 NOW BACK IN PRINT IN SOFTCOVER!

Yes! 382 pages of comics selected from the next-to-impossible-to-find first fifty issues of King-Cat Comics (currently published under the title King-Cat Comics and Stories) by the long suffering self-publishing champ, John Porcellino.  King-Cat Comics is an ideal illustration of the  existentialist project that brings order and meaning to a life lived in an inherently absurb world.  Beginning in May of 1989, Porcellino put pen to paper and declared that he would have no rules dictating what he would produce, only that it would be true to his artistic instincts and that it would all be called King-Cat Comics.  As the years passed, King-Cat gradually evolved from its origins as a simple pastime, eventually becoming the central, defining aspect of Porcellino's existence.  Now, almost exactly 18 years later, just in time for the comic to reach the age adulthood, this fine collection is now available to give everyone a chance to experience King-Cat Comics' pen and ink birth, growth, maturation, and coming of age.  Also included are an introduction, extensive notes, and a complete index.  King-Cat Classix is the Swiss Army Knife of comics compendiums: it is the perfect beach book for the true-blue comics reader, the ideal gift book for the hard to please indy comics collector in your life, solid inspiration for a budding DIY comics creator, and, perhaps most importantly, a solid source for thoughtful reflection on the constitution of human existence.  Recommended!  Still need convincing?  Then check out this preview.

This item belongs to the categories: Collections, Copacetic Select, Graphic Novel
This item is part of the series: King-Cat Comics and Stories
You may also enjoy these related titles: