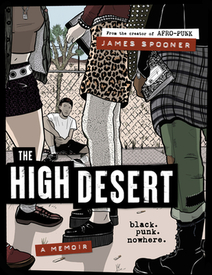 James Spooner's much anticipated graphic memoir from the creator of Afro-Punk has at last hit the new arrivals table here at Copacetic.  The High Desert is a heavy duty hardcover volume containing a 348 pages of black & white half-tone comics that provide an in-depth look at evolving sub-cultural communities while simultaneously conveying a moving and detailed coming of age story.  Here's what it's publisher has to say:

"A formative coming-of-age graphic memoir by the creator of Afro-punk: a young man's immersive reckoning with identity, racism, clumsy teen love and belonging in an isolated California desert, and a search for salvation and community through punk.

Apple Valley, California, in the late eighties, a thirsty, miserable desert.  Teenage James Spooner hates that he and his mom are back in town after years away. The one silver lining--new school, new you, right? But the few Black kids at school seem to be gangbanging, and the other kids fall on a spectrum of micro-aggressors to future Neo-Nazis. Mixed race, acutely aware of his Blackness, James doesn't know where he fits until he meets Ty, a young Black punk who introduces him to the school outsiders--skaters, unhappy young rebels, caught up in the punk groundswell sweeping the country.

A haircut, a few Sex Pistols, Misfits and Black Flag records later: suddenly, James has friends, romantic prospects, and knows the difference between a bass and a guitar. But this desolate landscape hides brutal, building undercurrents: a classmate overdoses, a friend must prove himself to his white supremacist brother and the local Aryan brotherhood through a show of violence. Everything and everyone are set to collide at one of the year's biggest shows in town...

Weaving in the Black roots of punk rock and a vivid interlude in the thriving eighties DIY and punk scene in New York's East Village, this is the memoir of a budding punk, artist, and activist."

This work has clearly struck a chord with other creative outsiders. We'll go out on a limb and say that this is likely to be the only book ever published to feature pull quotes from both Ian MacKaye and Alison Bechdel  – and Fishbone's Norwood and MariNaomi! (among other notables)

"Punk is James Spooner’s salvation as he comes of age in a racist world, but punk culture is also a microcosm of that world. The path to reconciliation—with himself, his parents, his peers—is navigated with exquisite nuance and compassion. A beautifully drawn story."

“This beautifully paced graphic memoir illustrates the struggle and joy of finding self-acceptance and community on the fringes. It perfectly captures the innocence, camaraderie, and trauma of being a punk of color in the late eighties and early nineties. I couldn’t look away.”

MariNaomi, author and illustrator of Losing the Girl

"Washington DC is a long way from Apple Valley and the circumstances of James’ introduction to the punk underground are vastly different than mine, but there’s something so recognizable in The High Desert that I felt like I was there. I suspect in a way we were all there at one time in our lives, navigating and negotiating as we figured out just who the fuck we were and who was with us. I loved this book."