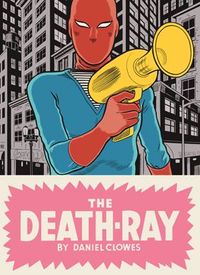 2011 PEN Center USA Literary Award Winner, Daniel Clowes originally wrote and drew this work a few years back for what remains the last issue (#23) of his epoch-making auteur-comics series, Eightball.  Here in this laminated, oversize, full color hardcover edition from Jonathan it is represented in a "revised" version.  We remember well when Clowes first announced that he was working on "a superhero story set in the 1970s" and he stated that his doing so was "a sure sign that I have lost my mind" (or something along those lines).  Yet, for all that, when it arrived on the stands, it was another Certified Clowes Classic™.  And now here it is again for all those who weren't there the first time around – and for those who were, as well – and at a bargain price to boot!

PLEASE NOTE: The copies we are selling through this listing are of the UK, Jonathan Cape edition.  They are identical in every way to the North American, Drawn & Quarterly hardcover edition except for the text on the copyright page, the ISBN, and the price.

!SALE!  (BACK IN STOCK – just found an unopened case in the back room!) – GONE!
This item belongs to the categories: Graphic Novel, Gift Catalogue, Broke Christmas
You may also enjoy these related titles: