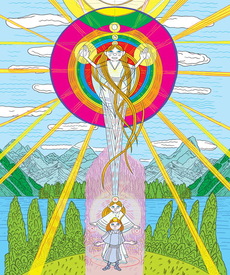 Think of how much a better place the world would be if, when people heard the name Ron, instead of thinking of Ronald Reagan, Ronald McDonald or L. Ron Hubbard, they instead all thought of Ron Regé, Jr.!  We can all now do our part to make this a reality by partaking in Ron's mega-masterwork of mental (re)mapping, The Cartoon Utopia, wherein Ron dives deep into the waters of theosophy, through which a peck of profound painters of the previous turn-of-the-century swam – most notably Wassily Kandinsky and Piet Mondrian, en route to their mature styles – and also ascends into the abstruse realms of alchemy that informed artworks of earlier European eras, but that, over the last century, has come to be seen more as a metaphorical language well-suited for matters of spiritual self-discovery.  The Cartoon Utopia is an act of spiritual self-discovery.  What we encounter in the pages of this fantastic tome is not a "graphic novel", a fiction or story – or even a non-fiction history – of a journey told in words and pictures.  Rather, it is the journey itself:  a direct communication of the spirit as it grows, in and through the art work before our eyes.  Ron takes us along on his pen and ink journey to the palace of wisdom.  Along the way we'll meet the writings and ideas of Theosophists such as H.P. Blavatsky, as well as luminaries of arts and letters such as William Blake and Alan Watts, to name but two.  Regé follows Kandinsky in believing that "the artist must have something to say, for mastery over form is not his goal but rather the adapting of form to its inner meaning," and "that is beautiful which is produced by inner need, which springs from the soul."  Each page of The Cartoon Utopia is a transmutation of the spirit through cartooning into a revolutionary state of mind.  Hitch a ride on this PDF preview and start your journey today.

This hardcover edition has been out of print for awhile now... BUT – we just scored ONE very nice copy!

This item belongs to the categories: Copacetic Select, Gift Catalogue
You may also enjoy these related titles: