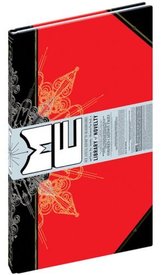 This startlingly well produced Big Book, the latest from the greatest full grown adult comics whiz kid, that literary minded artistic genius and graphic technician extraordinaire who possesses what could possibly be the most divided consciousness in a fully-functioning adult in the known world -- yes, that's right, Mr. Chris Ware -- collects material previously presented in the comics periodical Acme Novelty Library #s 7 & 15 (AKA Acme Novelty Big Book of Jokes #s 1 & 2 ) published by Fantagraphics, along with plenty of finely crafted, bruising new work with which it has been seamlessly integrated, all bundled together in an extravagant and exquisite oversize hardcover edition published by Pantheon Books.  It pretty much goes without saying that this singular volume is a must for anyone interested in contemporary comics.  A contender for the most densely packed volume in the  history of printing -- there are more drawings and more text squeezed into every nook and cranny than any other book we can think of -- this is a work that will rend the senses and boggle the mind.

With this stellar (literally; you'll see...) volume, Chris extends his reign as the undisputed master of abnegation, rejection, dejection, denial, disgust and loathing -- self and otherwise.  An all-American Samuel Beckett, Mr. Ware is an artist in whose underlying sensibility one can detect un sotto voce, "I can't go on" -- yet go on he must and, with one clean clear line after another, go on he unrelentingly does.

While countless others before him have plundered the vaults of popular culture in search of material with which to satirize the American mind, Ware has managed to move the game to an entirely new arena and in the process raise the stakes.  His is a thorough going formal critique of the bases of American power that defines them as rooted in a ruthless exploitation and degradation of the small, the weak and the naive; the disenfranchised of the world.  In keeping with the tried and true dictum of working with what you know, Ware finds that his experience has shown him that no one more fully fits this definition than the consumer of pop culture ephemra -- comic books, action figures, cereal premiums, and the like, all of which he likens, ultimately, to pornography and a slow but steady erosion of the soul.

The work contained in this volume functions on one level as a eulogy for those naive youths (among whose number was, doubtless, one C. Ware) who were seduced and abandoned by the American dream as embodied in the popular culture of the twentieth century.  As a result of his deep insights into the American version of la conditione humane, Ware's humor is quite effective in cutting straight to the heart of the pain and surgically releasing it in what he hopes will be a curative and restorative laughter.  But it is a laughter which dances on the edge, just one slight misstep away from a plummet into the abyss of desolation and loss, for this is not an ordinary "funnybook," and the pieces it contains can hardly be wholly contained by the classification of "comic":  they express what are surely some of  the most brutally bitter narrative sequences in the history of art and literature.  Over and over again we are confronted with bald, clear-eyed betrayal of the worst and most debased kind:  of consumers by the very companies they patronize, of citizens by their own government, of a son by his own father, of a lover by the loved, of creation by its creator; all leading inexorably to the betrayal of one's own self to utter despair.  Ha-ha, indeed.

The universe portrayed in The ACME Novelty Library is one in which the conception of individual actions being governed by personal choice is revealed to be a hollow sham behind which lies a cold reality in which all events are soullessly controlled by the primal drives and those forces that manipulate them, and in which, in the final analysis, all decision is pointless and meaningless.  The ACME Novelty Library is a distant cousin to Naked Lunch by William Burroughs, only this time crossing over from the other side of the tracks:  It is a brutally dark yet hysterically funny (provided that the reader hasn't been so  overwhelmed by despair that laughter is no longer possible) look at American culture which reveals that Ware has, in his own manner, come to the same conclusion as Burroughs:  The powers that dominate American life are, in the final analysis, pushers, and we the people are a bunch of hopeless addicts.  Of course, in order to successfully carry out his satire, Ware is "forced" to don the guise of corporate America himself in order to "sell" you his irony.
We leave the last word to the maestro himself:  here's Mr. Ware's own, typically self-deprecating description of his book: Book Description
Utterly eschewing the general bonhomie surrounding the newly-minted contemporary regard for the comic strip medium as a language of complicated personal expression and artistic sophistication, professional colorist and award-winning letterer F. C. Ware returns to the book trade with “The ACME Novelty Library,” a hardcover distillation of all his surviving one-page cartoon jokes with which he tuckpointed the holes of his regular comic book periodical over the past decade. Sometimes claimed to be his “best work” by those who really don’t know any better, this definitive congestion of stories of the future, the old west, and even of modern life nonetheless tries to stay interesting by including a luminescent map of the heavens, a chart of the general structure of the universe, assorted cut-out activitites, and a complete history of The ACME Novelty Company itself, decorated by rare photographs, early business ventures, not to mention the smallest example of a Comic Strip ever before offered to the general public. All in all, it will likely prove a rather mild disappointment, but at least it catches the light in a nice way and may force a smile here and there before being shelved for the next generation’s ultimate disregard and/or disposal.


Need more?  Can't get enough?  Do you feel like your nerves are shot? like there's something inexplicably missing from your life?

Check out this detailed review at Salon.com.

Once you're through there, you can move on to the link bestrewn Copacetic Chris Ware page.

After that, however, you're pretty much out of luck and on your own until you manage to put enough nickels together to purchase this ineffably desirable item.

NOW ON SALE FOR HALF PRICE!!!

This item belongs to the categories: Gift Catalogue, Copacetic Select, Collections
You may also enjoy these related titles: