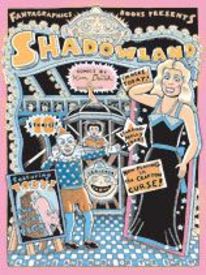 This sturdily produced oversize softcover collects pretty much all of Deitch's heretofore uncollected work of the last two decades.  Deitch has the semi-miraculous ability to capture the deranged hidden spirit of bygone eras -- primarily the 1920s and '30s -- that he renders here, in all their freakish glory, with his meticuous Fleischer-esque pen and ink style.  Shadowland is made up of ten complete stories, including the five shorts that were originally published in Weirdo ("Murder on the Midway!" "The Mystic Shrine," "Pong Wook-Ee!" "Young Ledicker," and "Two Old Birds"), "The Road to Rana Poona" which originally appeared in Raw, "No Business Like Show Business" (which originally appeared in 3-D and receives its first conventional printing here).  The feature attractions are the 41-page novella, "The Strange Secret of Molly O'Dare" that was originally serialized over a half-dozen issues  of Zero, Zero, and the epic, 45-page "Crafton Curse" that originally appeared in the 2-issue Shadowland mini-series and which makes up the centerpiece of this collection.  Also included are a series of newly executed framing illustrations, an introduction by the author and a full color "Shadowland Art Gallery" that includes many images only previously seen by a select few, along with reproductions of the covers of the comics many of these stories first appeared in.  All in all, quite a treat!

The Amazing, Enlightening and Absolutely True Adventures of Katherine Whaley

The Search for Smilin' Ed