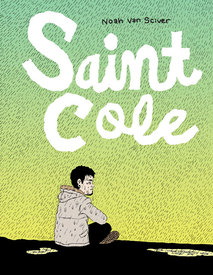 No one does contemporary, working class (yes, even here in the 21st century, this remains a useful descriptor), slice of life comics like Noah Van Sciver.  While he is highly prolific in the short form, Saint Cole is only his second - published - graphic novel.  In this volume, rather than another "slice of life" drama, it might be better to describe this as a slicing and dicing, chopping and grinding, pulverizing and grating and shredding of life.  Saint Cole is at times almost unbearable to read, as it charts four days in the life of Joe Cole, a 20-something working stiff with a food service job, a girlfriend, a baby, and a problem with alcohol.  He is living on the edge, and over these four days, precipitated by a snowballing of bad decisions, made one after the other with no inkling of where it is all leading until it is too late, he is pushed over it and his life takes a calamitous fall.  At the core of the narrative is the protagonist's near simultaneous confrontation with "the three ages of woman,” as he shuttles back and forth between the innocent teen hostess at his work; the experienced girlfriend / mother of his child at home; and the visiting worn-out, world-weary, would-be-mother-in-law.  This construction allows an essentialization of the protagonist's life to occur in his relations with these three women, its stages compacted into this brief span of days, and concluding with a harrowing, fearful portrait of a matured, maternal desire as all-consuming need.  As for the significance of the work's title and conclusion:  it would seem that Van Sciver has allowed his protagonist to obscure reality with a veil of madness; as the weight of the world's sins which have descended upon his own life becomes too much to bear, causing his corporeal life to descend into hell, his æthereal self is thereby allowed to ascend to heaven... as Saint Cole.  A cautionary tale for our times that simultaneously serves as an indictment of American society, Saint Cole is a portrait of quotidian depravity that is expertly and efficiently rendered by Van Sciver; one that offers up an effective and affecting example of the communicative power of the comics form.