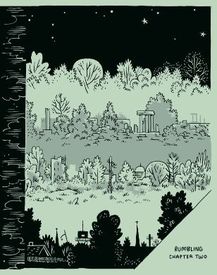 This new self-published release marks the terminus of a round-trip of sorts.  Customers of long-standing will recall that Huizenga burst into Copacetic consciousness with the startlingly original work contained in his self-published series, Super Monster, which climaxed with the 14th issue, the one-of-a-kind masterwork entitled Gloriana Comics (which was reprinted as Or Else #2, see below).  It was not long after the publication of this issue that Huizenga was "signed" by Drawn & Quarterly, who went on to publish several new pieces in D & Q Showcase #1, a continuing series, Or Else - which combined material from Super Monster with newer material -- and then released a hardcover collection, Curses, which pulled this and other material together.  Huizenga's work has/is also been/being published by Fantagraphics (Ganges) and Buenaventura (Kramers Ergot, Fight or Run) as well.  Yet, while his star was rising over the field of contemporary comics, he continued to self publish smaller, more personal / less accessible works such as untitled, Sermons and New Construction.  Now, a combination of market realities, personal preference and artistic aims has brought about the cessation of Or Else and the bringing forward of Huizenga's self-publishing efforts.  Rumbling, Chapter 2 continues the "adaptation" (really, a massive inflation [reinflation?] of a work "from which all the air has been removed" – Manganelli's stated aim in creating one hundred novels each of forty lines) of Centuria: One Hundred Ouroboric Novels (#44) by Giorgio Manganelli that began in Or Else #5.  Rumbling, as we stated in our review of the first part, imagines a United States embroiled in a sectarian struggle which has metastasized into armed military conflict that simultaneously harkens back to the religious wars of pre-Enlightenment Europe as well as the present armed struggles in Iraq, Iran and Afghanistan.  It works to imagine how these wars might come about and what they might look like if they occurred on US soil.  This continuation is bracketed by a dense two-page lead-in that offers a different sort of speculation: that concerning a look back from the future brought about by the future imagined in Rumbling and the consequent technological evolutions that occur and how they in turn reformat consciousness; a sort of flash-forward within a flash-forward, or a speculation within a speculation...  Intellectually digesting the contents of this issue involves a fairly advanced level of abstraction in order to successfully process.  And a knowledge of the history of religious conflict certainly wouldn't hurt.  That said, Rumbling furthers Huizenga's unique employment of the language of comics to craft a hueristic exposition on the centrality of process in the contemporary historical dialectic.  In addition, by crafting narratives which delineate the steady erosion of our human being that is effected by the merciless march of history and so provide a cautionary tales by which to avoid the worst of it, while simultaneously trying to win back the heart of the matter by insinuating a morally guided reason inside the machine, Huizenga strives to remind us that there are many possible worlds and it's up to us which one we choose to live in.

This item belongs to the categories: standard pamphlet comic book, Handmade
You may also enjoy these related titles: